I’ve been on a search for the ideal pair of wireless circumaural pair of headphones for a very long time. So when the opportunity came to review Bose’s latest pair of Bluetooth headphones, the SoundLink II, and compare it against Beats Studio Wireless as well as my Bowers and Wilkins P5, I leapt at the chance.

Read on to find out which I think are the best, and win a pair for yourself!

I own a pair of Bowers & Wilkins P5 Wireless headphones, which will be the yardstick against which the Bose and Beats are measured. At $399.99, it’s the most expensive pair of the bunch. The Bose SoundLink II and Beats Studio Wireless retail at $279.95 and $379.95 respectively. Naturally, the three headphones will be pitted against one another but I have no reservations about revealing any downsides of the B&W, even though I already own them. 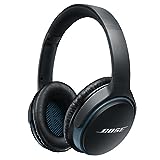 I’ve been using the Bowers & Wilkins P5 Wireless for about 6 months. The decision to purchase them came after a bit of online research and a trip to the Apple Store where I tested them, as well a couple of other headphones including a Beats Solo2 Wireless and a Bang & Olufsen BeoPlay H7. At the time, the Bose SoundLink II wasn’t available. I settled on the P5 Wireless due to their comfort and unadulterated sound signature. They costed a whopping AU$599.95 (US$424 including tax). No, these aren’t your run-of-the-mill $50 headphones.

Before heading out to buy a pair of Bluetooth headphones, here are 6 things to consider and 10 terms you need to know.

While there are many uses for Bluetooth headphones, I to use mine primarily for consuming video. In other words, watching TV shows and movies — so that’s how the three pairs of headphones were tested: in a fixed environment (my living room), paired to a Mac Mini at the heart of a home media center. The distance between the Mac Mini and the sofa was constant to ensure that all three pairs of headphones were be subject to the same conditions.

I paid particular attention to three aspects during testing: connection quality, battery life, and comfort. All of these factors should be relevant to your particular use case, too.

Generally, all three headphones are well-built, but one very distinct feature set the Bose apart from the other two: it’s mostly made of plastic – there’s no metal bits in sight. The B&W P5 Wireless shares most of the design cues with its wired brethren: expensive leather over metal-frame headband, metal adornment over the outer housing, the works. The Beats Studio Wireless also has metallic finishes on the plastic outer housing, which doubles as volume adjustment buttons on the left earcup.

What do you think happens when the Bluetooth module is surrounded by so much metal? You guessed it – the signal drops. As a result, the Bose SoundLink II was the most reliable of the three in terms of link quality, which I attribute to the absence of metal. The assumption is totally unscientific, however during testing, the Bose did not drop its connection at all, while the Beats did so occasionally; the B&W P5 suffered dropouts frequently. The P5 Wireless performed so poorly that I initially had to ring up B&W’s support for help in identifying the issue.

Poor link quality undoubtedly affected range, so the P5 Wireless had the shortest range of about 5 meters (10 feet) before it was rendered useless. The Beats and Bose lived up to their advertised range of 10 meters (30 feet) with intermittent link issues at maximum distance.

Link quality issue aside, the P5 Wireless felt the most refined – its elegant design coupled with use of quality materials resulted in a product that wasn’t just beautiful, it felt like it would last forever. The connection issue wasn’t quite so obvious when the P5 was paired with my iPhone in my pocket. But if I could turn back time, I would have bought the wired version of the P5 instead. Sadly, due to Apple’s — frankly insulting — 14-day return policy on third-party products, I’m stuck with a pair of wireless headphones, which let’s face it, may as well be wired.

Setting up the Bose SoundLink II was a piece of cake: move the sole toggle from the OFF position to ON, then one more notch up to Discoverable. It also supports NFC pairing with compatible devices.

Once paired, the Bose will automatically connect to two previously-paired devices every time it powers on, and will switch between devices seamlessly. Bose calls this Seamless switching. Say for example, the SoundLink II is paired with both your phone and tablet, and you’re watching a movie on your tablet, then the SoundLink II will relay audio from the tablet. If your phone rings, the headphones will automatically pause the movie on the tablet, and switch over to your phone.

During start up, it will also announce the devices it’s paired with, along with its battery level.

Pairing devices with the B&W P5 Wireless involved sliding the power button to turn it on, then pressing and holding it for two seconds to put it into pairing mode. Once paired, the P5 will automatically connect to the primary devices (first device paired) after powering up. If you need to connect to a secondary device (paired after the first device), you’ll need to do so from the device’s Bluetooth menu.

Setting up the Beats Studio Wireless was also pretty straightforward (if you read the quick start guide). Power up the headphones by pressing the tiny power button on the right earcup, then press and hold the b button on the left earcup for two seconds to initiate pairing mode. The Beats can be paired with multiple devices, but will only automatically connect to the last used device.

All of the devices score well for setup.

On the Bose, battery level is announced when the headphones are enabled, and there’s also an indicator located on the side of the right earcup. The Beats has a series of five LED battery level indicators that light up during operation. The B&W uses a single LED to convey battery level through colors: green, amber, and red.

The Bose SoundLink II claims a 15-hour battery life, while the Beats Studio Wireless will supposedly operate for 12 hours. During testing, I kept a very comprehensive log of usage times and was very surprised to find that the Bose managed to last an impressive 24 hours of intermittent operation between charges.

On the other hand, the Beats ran for 10 hours before its low-battery light kicked in and begged to be recharged.

Although I did not manage to test the B&W’s battery life, I was satisfied with the operational times between charges. With average use, say approximately 3-5 hours a day, it would only need to be recharged after roughly a week.

Between the Bose, Beats, and Bowers & Wilkins, the B&W P5 is the most comfortable – largely because of its supraaural design, plus it doesn’t hurt that its leather pads are amazingly soft. However, if we were to take the B&W out of the equation and compare the two circumaural headphones, the Bose SoundLink II is clearly the more comfortable pair.

Not only is the Bose SoundLink II the lightest at 149.4 grams, the earpads are also better designed and utilize softer materials for extra comfort. There’s also an extra hinge between the headband and earcups on both sides that allow for a bit of rotation to accommodate the shape of the wearer’s head. These are the same hinges that enable the SoundLink II to fold flat for storage.

At 260 grams, the Beats Studio Wireless is the heaviest of the three and fatigue was expected to set in a lot earlier. The Beats has a more rigid structure, and the headband is less flexible compared to the Bose – and these two factors caused the earpads to press, rather firmly, on my head. After a couple of hours’ use, I had to remove the headphones to relieve myself of the pressure build-up. The Beats also caused my ears to warm considerably during use, which was rather uncomfortable and again, had to be remedied by taking short breaks. If you have a larger-than-average head, you might want to avoid the Beats.

Please understand that I’m not an audio expert, I’m an audio enthusiast. I’d like to think that I can tell the difference between a pair of rubbish headphones and a good one. That said, there really wasn’t any point in reviewing the audio quality of these three headphones. But if you’re after a verdict, here’s mine: They’re pretty darn good.

Like I mentioned earlier, I picked the P5 Wireless because it had the most unadulterated sound signature – it reproduced the original track most accurately. The Bose SoundLink II came in a close second. The Beats – as you would expect – amplified the bassy notes; as Beats put it: it’s designed to let you “feel your music”. During testing (watching videos), I didn’t notice extra thump but I suspect it would be more pronounced when listening to music.

When it came to isolation, the Beats took it home. It’s the only pair of the bunch with active noise cancellation. That, coupled with its great passive noise isolation, makes the Beats the headphones to pick if you do not want your listening experience to be disturbed.

Ironically, that is also its Achilles’ heel. Active noise cancellation on the Beats Studio Wireless is enabled whether you want it or not, even when using it in wired mode. So when its battery is flat, that’s it – it won’t work until it’s recharged. If it’s noise-cancellation you’re after, these alternatives won’t break the bank.

The Bose SoundLink II’s plastic housing makes it pretty inept at noise isolation. So does the B&W P5’s supraaural design. But unless you’re surrounded by extremely loud noise, all three are reasonably good at keeping unwanted conversation from ruining your viewing pleasure.

Overall, the Bose SoundLink II and Beats Studio Wireless are two great pairs of Bluetooth headphones. If I had to pick the better of the two, it would be the Bose. Not only is it quite a bit cheaper, its superior battery life and undeniable comfort trumps any and all advantages the Beats held, which was mainly active noise cancellation – and I can certainly live without that.

While there’s a bit of buyer’s remorse happening with the P5 Wireless, I’d still hang on to it. It may be rubbish for use with a home media center due to its inability to maintain a strong Bluetooth connection, but it’s great when paired to a device nearby, like a phone in your pocket. That’s when the P5 Wireless really shines.

Bose Soundlink II are best for at home use, but the Beats Studio come a close second. For pairing with a nearby device, the P5 Wireless win out, but their range limits their use around the home. Our verdict of the Bose SoundLink II: 9/10