How to Build a Home Theater on the Cheap

It’s easier than ever to build your own home theater; heck, you can even get the IMAX experience in your living room! The challenge now is to do it without breaking the bank. Surprisingly, a few simple tricks can make that happen.

Among the common mistakes in setting up a home theater is to under- or over-budget for the project. But by knowing which items you can skip, which you can repurpose, and which budget buys to look at, you can save a few bucks without compromising on the quality of your experience. That’s what we’re looking to do here.

Don’t Buy Everything At Once

Before you start, this is the most important advice you will need. Given the way technology updates these days, you won’t find the cutting-edge, future-proof stuff in every category at the same time. So if you try and buy all the parts together, you’ll end up compromising, and maybe need an upgrade sooner than you thought.

Instead, buy the can’t-do-without components right now, and get cheaper variants for everything else — or skip them altogether. Even for those important bits, do your research on how long they will last and spend accordingly. We’ll advise on some of these aspects in this article, but no matter what, don’t purchase everything at once. Stagger out the components so that you buy the most future-proof, best-value-for-money device at every stage.

This is another very important point to keep in mind: in 2016, you don’t need a smart TV. Especially if you’re setting up a home theater, a smart TV is wasted. You will have to get a Blu-ray player or some sort of , which will do everything a smart TV does, and probably do it better.

Look at buying old TVs that don’t have internet connectivity or apps. They will be cheaper, and old models are often heavily discounted when the company stops manufacturing them. Go for a big screen, a good panel, and other recommendations from our guide to buying a TV. But ignore the guide’s formula for picking the right size; for a home theater, you need to go as big as what fits in your room!

The other decision you’ll need to make is whether you want to buy a 4K TV or not. In mid-2016, budget buyers still should not buy a 4K TV. If you already have one, stick with it. If you don’t, then don’t buy a new one. Yes, this is a controversial statement, but hear me out.

The reason is a lack of standardization, high prices, and the dearth of 4K content. The Blu-ray consortium has only recently agreed on a 4K standard for Blu-ray players. The official 4K release calendar shows how few movies are being released in 4K, never mind TV shows and live broadcasts. The number of Blu-ray players that support 4K is even smaller, and they are quite costly at the moment. And then there’s the battle between the HDR standard and the proprietary Dolby Vision.

For a budget buyer, 4K shouldn’t be a consideration at the moment. Get a cheaper TV, save that money, and buy a good 4K HDR TV once the price and standards settle down.

Instead of TVs, you can also consider a projector. We’ve reviewed quite a few, like the JmGO G1 Smart projector. For the best value-for-money option, most of the internet recommends the BenQ TH670.

Before you go and get a projector, though, please know how to set up a projection-based home theater. Because a projector doesn’t have backlight, you’ll need to spend on additional materials like blackout curtains and a projection screen (our resident expert James recommends the Homegear 120HD).

Also, at the moment, 4K resolution is a non-option when you’re on a budget. Projectors with 4K output cost an arm, a leg, and your 32nd tooth. Right now, the tech world is rejoicing that Epson made a 4K projector that costs less than $3,000. Yup.

Chances are you have an old PC or laptop lying around somewhere, or you know someone who does. That right there is the first DIY budget home theater PC (HTPC) you should consider. Heck, it’s free, after all.

Even if you have to add a few things, repurposing your old PC will be cheaper and make a more well-rounded media unit than any gadget you buy. Yup, even the $35 Raspberry Pi. While we’re big fans, there are certain things the “Pi Home Theater” can’t do.

As we once pointed out, cord cutters should buy PCs over set top boxes. The flexibility that a proper computer gives you cannot be compared to what you’ll get with even something like the much-loved Roku or other streaming devices. More often than not, a PC can do the tasks a streaming device will, but it doesn’t work the other way around.

More importantly, a PC keeps your options open for the future. You could add a 4K Blu-ray drive, or a better audio card, or upgrade the processor, or add a graphics card to make it into a gaming console, and so on.

You just wasted your money if you bought speakers with the “bigger is better” philosophy. Speakers are all about how you set them up, and the quality of the components they use.

You need to buy the right speakers for your room. If you have a small living room, a 9.1 channel setup is overkill. Depending on whether you’ll place satellite speakers at the back or the sides, you’ll need to choose speakers that offer good bipole or dipole output. It might sound like a lot of jargon, but the bottom line is, you need to buy what’s right for you, which is not necessarily the swanky 7.1 Bose speaker setup you saw at your friend’s place. Check Crutchfield’s detailed guide to figure out the right speakers based on your living conditions.

A home theater system defaults to a 5.1 setup (i.e., five satellite speakers and one subwoofer). Before you purchase anything, figure out where you will place each speaker, how the wiring will work, and other details. Once you have done that, go and buy the Monoprice 8247 for $90.

These cheap speakers have received plaudits from the most respected audio reviewers as the best budget speakers out there. Heck, in this price range, we didn’t even find used speakers of better models. If you’re building a new home theater and want to keep the cost low, this is a smart purchase. Remember, you can always upgrade the speakers later!

With every HTPC, you will need a good remote control to manage all the different devices hooked up to it. This calls for a universal remote. The best is the Logitech Harmony 650, but if you’d like to save a few bucks, you have a few other options.

If you have an old Android smartphone or tablet, you can turn it into a remote controller for a PC. Apps like Sure Universal Remote make it a breeze to set up all the gadgets on your Android device. The only problem would be if your Android doesn’t have an infrared (IR) blaster.

Instead of repurposing your Android, you could also buy a cheap universal remote. Kannon recommends the Measy RC11, or several other universal remote controllers for HTPCs. 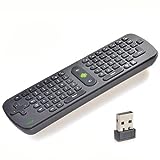 The tech stuff is only one part of your home theater experience. You’ll also need a nice cabinet to put your gadgets, a good sofa or recliner to watch in piece, maybe a mini fridge for a cold brew. All those costs add up, so don’t forget about them.

The good news is that this is one area where you’ll find a lot of freebies or sales. Check Craigslist for local estate sale listings, or sign up at EstateSales.net to get alerts for your area. You’ll often find items in good condition for a low price.

Yesterday's awesome Craigslist find. Who in their right mind just THROWS AWAY a $500 receiver? pic.twitter.com/ikEpOvuZYg

You will save major bucks if you regularly check Craigslist’s Free Stuff section for your area. You might just pick up a mini fridge for free!

The Only Place to Splurge: Receiver

The receiver is the most underappreciated and most important part of your home theater. In this one aspect, while you can save some money, we would advise against it. Think of the receiver like the processor of a PC, the engine or a car, or the patty of a burger. If you get this wrong, the whole thing is ruined. If you get it right, compromises in other parts are bearable.

We already have a full guide to pick the right receiver for your home theater needs, and Sound and Vision’s picks for top receivers should do the job of narrowing down your selections. Just to give you an idea of price, the Wirecutter’s pick for the best budget receiver is the Yamaha RX-V379 for $230.

Tell Us Your Must-Haves!

In our opinion, the screen, the receiver, the media player or PC, the speakers, and the universal remote controller are the must-haves in any home theater setup. But hey, that’s just what we unanimously agree on. Some of us say that’s incomplete without a good recliner or sofa, others can’t believe we don’t have a 4K Blu-ray player, and a few reckon it’s not a home theater if it doesn’t support 3D.

So we’d like to hear from you. What do you think is the must-have element for a home theater, and which model would you recommend?