Lenovo’s ThinkPad laptops are known as being some of the best Windows laptops you can buy. They’re powerful, they last very long in both general wear and tear as well as battery life, they have fantastic keyboards, and they have more ports that you’ll probably ever need. Sure, they’re also pricier, but you’re definitely getting your money’s worth. So when Lenovo released a ThinkPad-branded Chromebook (in addition to their IdeaPad Chromebook), we were eager to see whether the ThinkPad branding was justified.

The Lenovo ThinkPad X131e Chromebook ($244), with its 11.6-inch display, has every other 11.6-inch Chromebook as a competitor. That includes the Samsung Chromebook 2, the Acer C720 and C720P, and even the Lenovo IdeaPad N20P. Although the Lenovo ThinkPad X131e doesn’t have fancy features such as a touchscreen or a “Stand Mode”, it’s currently one of the cheaper Chromebooks in its category, whilst supposedly maintaining the build quality, battery life, and performance that ThinkPads are known for.

About the Lenovo ThinkPad Chromebook

This Chromebook comes with a dual-core Intel Celeron 1007u processor clocks in at 1.5 GHz, 4GB of RAM, a 16GB SSD, and a 720p camera. Despite a relatively low price of $244, the 4GB of RAM and 720p camera are very surprising but welcome additions. Usually, Chromebooks include a lower resolution webcam of 640 x 480 and rarely come with more than 2GB of RAM. These upgrades definitely turn the ThinkPad X131e into more of a workhorse, allowing you to run more tabs for improved productivity and higher-resolution video conferences. So far, everything looks great on paper.

The design is also very much in line with other ThinkPads. Its dimensions are 11.55 x 8.50 x 1.27 inches, with a weight of 3.92 pounds. The ruggedness of the device also makes it a bit thicker than usual. While it clearly doesn’t follow other Chromebooks with the “thin and light” strategy — a thicker and heavier device is worth the tradeoffs of ruggedness, performance, and a good battery.

Rugged is a good term to use. Although the device is made of plastic throughout, it doesn’t feel cheap at all, and seems like it could take a beating. There are no creaking noises, nor do any of the components feel loose or in any way not how they should feel. It’s quite an impressive effort.

Also similar to its ThinkPad brethren, this Chromebook has plenty of ports. On the left side, there’s a VGA port,  2 USB 3.0 ports, an Ethernet port, and a headphone/microphone combo jack. On the right side, there’s a Kensington lock slot, the power port, a powered USB 2.0 port, an HDMI 1.4 port, and a 4-in-1 SD card reader.

In terms of connectivity, there’s 802.11n WiFi (which is sufficient but a bit of a disappointment) and Bluetooth 4.0.The Ethernet is only 10/100 Mbits, so if you need higher throughput, you may actually want to use the WiFi instead of the Ethernet port. At least you have the option to use Ethernet if you want; most small devices just omit it entirely.

The software experience of the ThinkPad X131e Chromebook is very similar to any other Chromebook — Chrome OS is identical on all of them, after all. If you’ve used a Chromebook before, you’ll feel right at home with this one as well. That being said, the different hardware that comes with this ThinkPad Chromebook does still make a difference in the long run. The large array of ports means that you shouldn’t have any issues connecting peripherals, for instance.

A subtle but notable touch is the addition of a VGA port. In a lot of business environments, you still tend to connect to projectors and other similar devices via a VGA cable. HDMI does get used sometimes in these scenarios, but VGA is still more prevalent. Even at my university, a lot of professors still connect their laptops to projectors using VGA.

The 11.6-inch display is quite nice to look at, but nothing outstanding, while the resolution of 1366 x 768 is average. The color representation is very good, and so are the viewing angles. Simply put, it’s a display that works well and should perform for a long time. There’s little to complain about, other than that the bezel around the display is a bit large. Once again, it follows the ideology of a ThinkPad where function is more important than looks.

Perhaps second in importance to the display, are the keyboard and trackpad. ThinkPads are famous for having one of the best keyboards on a laptop, period. While I’ve never owned a ThinkPad myself and therefore can’t confirm that they’re the same, I can say that I love this keyboard. Typing on it simply feels…right. There’s enough spacing between keys so that you don’t hit other keys on accident, and the key travel is perfect — not too shallow and also not too deep.

The trackpad, sadly, is a bit of a let down. It looks small, but swiping left and right doesn’t feel constrained at all. Swiping up or down does a little bit, however, because not only is there less space in that axis, but the trackpad also slopes down a bit just before it reaches the left and right mouse buttons at the top. This very top portion of the trackpad doesn’t register your finger movements either. This makes the already-short space in that axis feel even smaller. As long as you don’t put a lot of pressure on the trackpad with your finger, the accuracy is reasonable.

If you find it uncomfortable, you still have options. First, there’s the track pointer in the middle of the keyboard that lets you move the mouse quickly without removing your hands from the keyboard. It may take some getting used to, but it’s a nifty feature as long as you don’t need pinpoint accuracy. And of course you can always just attach a USB mouse — there are three USB ports, after all.

The webcam, with its 720p resolution, is above par. It provides a fantastic video stream of yourself, which is refreshing after reviewing all of the other Chromebooks with basic webcams. However, to be heard, you’ll want to use a microphone that you plug into the audio jack.

Why? The little dot next to the webcam isn’t the microphone — that’s the webcam indicator light. The microphone is located just below the left Ctrl button on the keyboard. This means that it’s quite easy to cover the microphone with your hand if you want to type anything, muffling your voice. I definitely would have preferred the microphone to be located near the webcam, so I wasn’t sure what Lenovo was thinking there. In any case, it’s easily fixed with an external microphone.

The stereo speakers, which are located in the front, just under the palm rest, are pretty decent as well. I find the placement of the speakers to be acceptable, as they provide good sound that bounces in your direction so long as the Chromebook is on a table or other flat, hard surface. The grille is quite large so a lot of sound can come out of the speakers.

The quality of the sound is good enough for general media consumption, but they may not be the best if you mainly listen to music. The speakers don’t sound like tin cans, but they don’t offer rich sound either. There are plenty of Chromebooks that are much worse off in this department.

Performance genuinely surprised me. All animations were super smooth, there was no noticeable lag anywhere, and even 72op YouTube videos at 60 frames per second played flawlessly. It did encounter some stuttering when I tried to play 1080p/60fps, but 30fps playback was flawless.Given the display resolution, you wouldn’t see a difference beyond 720p anyway; merely waste bandwidth and resources.

Lenovo advertises a 7.5-hour battery life for this model, which isn’t as high as some of the others on the market; in testing, I found 6 to 6.5 hours was more reasonable, but that was with a lot of video playback, which uses more power than simple browsing and document/spreadsheet editing. I think that 7.5 hours should be plenty of time between opportunities to use a wall outlet. Hopefully if another generation of this Chromebook comes out in the future, the battery life will improve.

So what’s my overall rating of this Chromebook? Although it isn’t the prettiest, thinnest, or lightest Chromebook, most other things about it is laudable. The only complaint I have is the trackpad, but that may just take some getting used to. Other than that, it’s a great device that can quickly become your companion wherever you go. Plus, at $244, it’s affordable too.

Buy – it deserves the ThinkPad branding by making it easy for you to get things done. 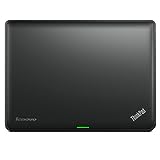 The winner will be selected at random and informed via email. View the list of winners here.