Today we’ll be testing two of the company’s latest products, the smartphone-friendly HD Two over-ear headphones, and the apparently neutral-sounding CB-1 studio monitors. Both have a different purpose, both perform differently, and we’re giving both away!

The Status of Headphones

Status Audio is a relative newcomer to the headphone scene. Their name is a not-so-subtle nod to the fact that consumers are increasingly putting the branding and aesthetic appeal of headphones over sound and performance, and the company makes intentionally “brand-less” headphones that hope to mimic their competitors in all but lacklustre sound quality.

There’s no celebrity “Beats by Dre” style endorsement, no retail middleman, and little in the way of pricey-looking branding. There’s not even a recognisable logo on anything they sell.

While trying very hard to be the “anti-Beats” of the headphone world, they’ve still managed to copy the design of the very brands they hope buyers will eschew. The original HD Ones generated a lot of buzz online, partly because they look just like a pair of Beats headphones — complete with red and black color options. The HD Twos reviewed here seem loosely based on the Parrot Zik 2.0s and, while studio monitors often tend to look the same, the CB-1s have a certain Audio Technica vibe to them. 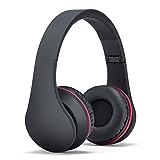 Despite being born of the same manufacturer, these are two very different headphones — and though they do have their own unique purposes, they have their similarities too.

The HD Twos are a pair of $99 sound-isolating over-ear headphones. They use a wired circumaural design which foregoes active noise cancellation in favor of creating a relatively tight seal over the whole ear. While this isn’t a patch on active technology when it comes to ambient sound reduction, the passive isolation Status has used does a good job of muffling background noise.

The HD Twos have a solid feel, with a metal over-head support structure, soft cushioning, and folding cans that collapse inward for transportation. The earcups have a thin but firm layer of cushioning, and overall I’d say the black and metal design looks pretty good, but not entirely discreet.

The headphones come with a somewhat cheap-feeling hard case to protect them in transit, in which you’ll find a very cheap-feeling 3.5mm stereo cable, and another very cheap cable that includes a microphone and remote with a single button. There’s a 3.5mm stereo port on both cans, which is a nice touch. The cheap cables are easily forgiven as they’re user-replaceable.

Sound quality is good, but with a few caveats. These are typically “consumer” headphones in that they favor making your music sound exciting over faithfully reproducing the recording. They aren’t as guilty of this as many other headphones at this price point, but the verdict on whether they’re good or not depends on which genres and artists you’ll be listening to.

While sound isn’t entirely muddy, the low-ranges can become a little overbearing which results in a bass-heavy response. For clean-sounding electronic music, drum and bass, highly produced pop and similar, this won’t matter a huge amount. It feels like the mid-range gets a little lost at times when listening to punk, metal, and acoustic recordings — vocals tend to disappear behind the bass and punch of the treble.

They also lack “warmth,” sounding a little distant and sterile at times — mostly when listening to guitar-heavy tracks and instrumentals. That said, they’re not the only headphones guilty of this at the $99 price point, and compared to much of the field they provide a very listenable experience.

Unfortunately, I haven’t found the HD-Twos particularly comfortable. On my head, the cans feel quite tight and press firmly beneath the ear which takes a bit of getting used to. You can mitigate this by adjusting how they sit, and it’s most noticeable when you first put them on. This discomfort is partly down to the cushioning, and I found myself tolerating it but not entirely enjoying the time I have spent with them.

As someone who only takes their glasses off to sleep, I didn’t find that the HD-Twos pressed the frame into my head in an uncomfortable manner. I also accept that the discomfort I experienced could be down to my head shape, but as these are direct-from-manufacturer be aware that you won’t necessarily be able to try before you buy.

The CB-1s are quite different to the HD One and HD Two ranges, in that they’re not specifically designed for use outside of the house. Status has aimed these $79 cans squarely at producers on a budget, who appreciate a flat and neutral response, but they’ll appeal to anyone who wants their music to sound faithful to the original record.

The CB-1s also use a circumaural design which encloses the whole ear. Sound isolation is noticeably worse than the HD-Twos, as they have softer padding which doesn’t form such a tight seal on your head. Designed for use at home, the CB-1s don’t come with a carry case and feature a plasticky design that probably won’t stand up too well if thrown around in a bag.

The build quality might be the worst thing about these headphones. I noticed some static on the included 3.5mm coiled cord from the get go (when putting pressure on the jack) and have heard a few pops when adjusting the connection on the cans too. For this reason I’d be reluctant to put them through too much, for fear of breaking them.

The CB-1s feature large unforgiving cans which will certainly draw attention to you in the street, but design-wise I thought they looked pretty good overall. In the box you’ll find coiled and non-coiled 3.5mm stereo cords, both with a screw-in design for affixing firmly to a mixing desk. You also get a 3.5mm to 6.3mm adapter, ideal for use on older hi-fi equipment, mixers, guitar amps, and so on.

At their sub-$80 price point, the CB-1s provide surprisingly good sound quality. A flat response allows music to shine without unnecessarily over-emphasising bass and treble, which makes them suitable for a range of artists and genres — including subtle acoustic, hectic metal, classical, instrumentals, and even mixing your own recordings.

The CB-1s provide a warm, detailed sound that allows your music to shine, rather than artificially trying to make things sound more alive. For the money, they punch well above their weight and despite being the cheaper pair provide improved clarity and a more balanced response compared with the HD Twos. I can only imagine how good things would start to sound coupled with a good headphone amplifier.

They’re also reasonably comfortable, which is a good thing as they’re designed with long listening and production sessions in mind. There’s less emphasis on sound isolation, and more on providing a soft cushion. They don’t weigh a ton on your head on account of the plastic construction, and there’s plenty of padding on the headband too.

The CB-1s don’t come with a carry case, and they’re not really designed for use outside of the house — particularly given the size. They do fold down somewhat, but you’ll want to invest in some sort of protective case if you want to take them with you. On the upside, they sound so good that you probably will want to use them everywhere, especially at $79.

It seems that Status haven’t lied to us — they really have put their money into the sound, and though the HD Two fall into the consumer headphone trap we’re used to seeing from Beats et al, both pairs deliver quality audio at a relatively painless price point.

It’s odd that the HD Twos are more expensive given their obviously inferior sound, but they’re certainly the sturdier of the two pairs. They deliver great sound isolation at the expense of comfort, and they sound better than most competitors I’ve heard at this price point — especially those that focus on features like active noise cancelling and wireless connectivity.

The CB-1s are a different class of headphone altogether, and they’re bound to put a smile on your face for $79. They do any genre of music justice, though build quality is a concern and they probably won’t hold up very well in your airport carry-on luggage without further investment in the form of a hard case. They’re also massive, and there are a few crackles and pops when stressing the connectors and cheap cables.

But you can’t have everything at this price point, and I’m glad Status’ offerings sound better than typical fashion headphones and other cheap cans.

I’m not sure I can recommend the HD Twos as I didn’t find them that comfortable, and the sound quality was a touch disappointing. But if you need quality headphones on the cheap for use at home, the CB-1s are a compelling option that deliver sound quality you’d expect for double the price.